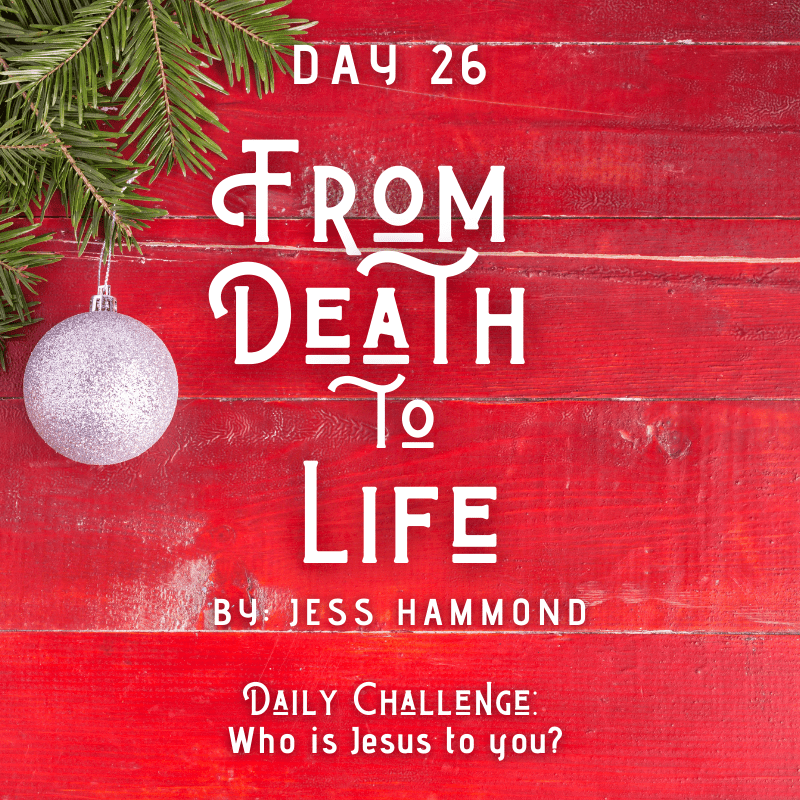 The Christmas season is my favorite time of year; I love (almost) everything about it. This year, as we have poured over the story of Christ from the Old Testament to the New, I sit in reverence and thankfulness for all that Christ has done for me. The longer I walk with Him, I realize just how desperate my heart is for His grace and transforming power in my life.

The presence of Jesus is not just a nice addition to our lives; His presence, His ways and His authority permeates every area of our lives.

So who is Jesus to you?

C.S. Lewis wrote, “I am trying here to prevent anyone saying the really foolish thing that people often say about Him: I’m ready to accept Jesus as a great moral teacher, but I don’t accept his claim to be God. That is the one thing we must not say. A man who was merely a man and said the sort of things Jesus said would not be a great moral teacher. He would either be a lunatic — on the level with the man who says he is a poached egg — or else he would be the Devil of Hell. You must make your choice. Either this man was, and is, the Son of God, or else a madman or something worse. You can shut him up for a fool, you can spit at him and kill him as a demon or you can fall at his feet and call him Lord and God, but let us not come with any patronizing nonsense about his being a great human teacher. He has not left that open to us. He did not intend to” (Mere Christianity,1952)

Who are you “preparing room for” this season?

Assuming you have made it through to the end of this Advent Devotional, you don’t consider Christ a lunatic. But, are you following Him as a good teacher who gives you a road map of how to live a productive and ‘happy’ life? Or are you truly making room for the Son of God who is coming back one day?

This week, we saw that God’s love is all-encompassing; He came for the lowly, for the wealthy, for the outcast, the broken, the unloveable, the rejected, and the outsider. He came because He is Creator of all and desires to reconcile His creation back to Himself.

He entered into our word to redeem us; He now invites us into His kingdom that will never end.

If His kingdom is now your kingdom, who in your life needs to know about God’s relentless love? I challenge you today to write down the names of at least three people in your circle of influence who do not know this life-altering love and grace. Begin to pray for God to open the door to share the hope of Christmas with them, and then be ready for the opportunities He brings!

“Praise be to the God and Father of our Lord Jesus Christ! In his great mercy he has given us new birth into a living hope through the resurrection of Jesus Christ from the dead, and into an inheritance that can never perish, spoil or fade. This inheritance is kept in heaven for you, who through faith are shielded by God’s power until the coming of the salvation that is ready to be revealed in the last time. In all this you greatly rejoice,though now for a little while you may have had to suffer grief in all kinds of trials. These have come so that the proven genuineness of your faith—of greater worth than gold, which perishes even though refined by fire—may result in praise, glory and honor when Jesus Christ is revealed” (1 Peter 1:3-7).

As Christ followers, we are ambassadors of this message of reconciliation. He has entrusted us to go and tell. Let’s be the hand and feet of Jesus in a world that is desperate for Life!

Who is Jesus to you?