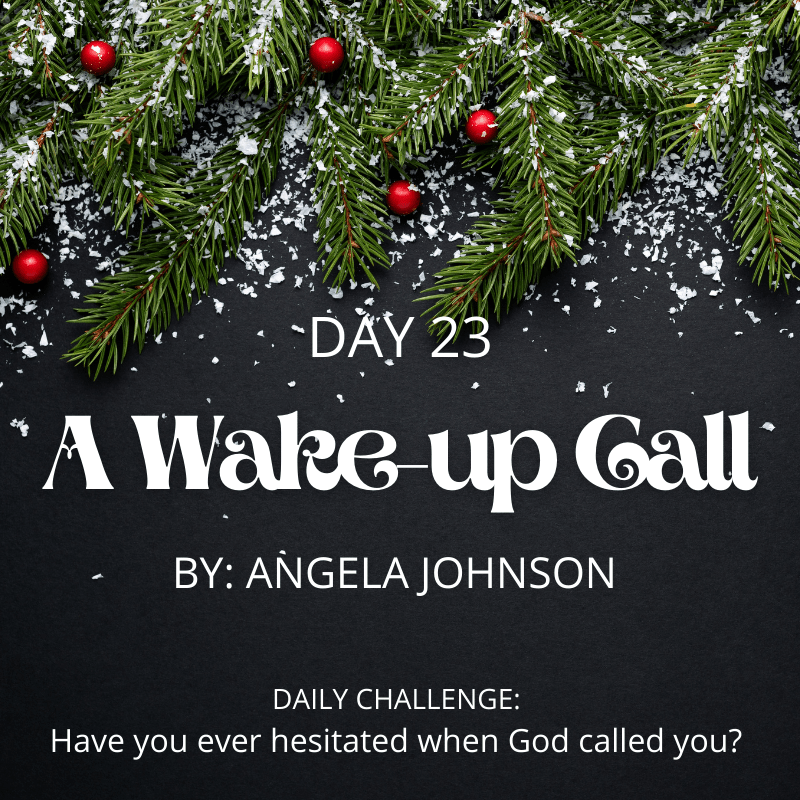 Imagine being woken from deep sleep with such an urgent message!

The only time I came close to experiencing an alarm of this type was when I received a frantic call that my brother had been run over by a drunk driver.  It was a call that startled me out of deep sleep, and I had to wrap my mind around the urgency of the message.  He’d been standing in a parking lot taking a picture of his friends, when a drunk driver hit him, crushing his leg. My brother was seriously wounded, but alive.  I gathered my things and drove straight to the hospital.

But, Matthew 2:13 tells of an even more crucial wake-up call.  Joseph, once again, has had an angelic visitation in a dream. The message was critical.  “Get up! Flee to Egypt with the child and his mother,” the angel said. “Stay there until I tell you to return, because Herod is going to search for the child to kill him.”

We don’t know how much time they had, but I imagine frantic chaos ensued.  I picture Joseph hurriedly gathering belongings and necessities for the 430 mile journey, while Mary desperately clutched her toddler King as they escaped through the dark covering of night.

Herod was on a blood-thirsty quest to murder the infant Messiah. He had become so paranoid that the child would dethrone him; he wanted Jesus dead. When Herod learned the Magi, who had been sent on a reconnaissance mission, had not returned with intel of the newborn king’s location, he became furious (Matthew 2:12; 16).

Can you imagine what would have happened if Joseph didn’t believe the message he’d received?

Can you imagine if he’d doubted the validity of his dream or questioned God?

Scripture tells us of the horrific event that followed: “Then Herod, when he realized that he had been outwitted by the wise men, flew into a rage. He gave orders to massacre all the boys in and around Bethlehem who were two years old and under…” (Matthew 2:16). This brutal act, now known as, “The Massacre of the Innocents,” fulfilled Jeremiah’s prophecy: “A cry of anguish is heard in Ramah — weeping and mourning unrestrained.  Rachel weeps for her children, refusing to be comforted — for they are dead.” (Jeremiah 31:15, Matthew 2:18)

Though the actual population of ancient Bethlehem is unclear, scholars estimate 20 baby boys under the age of two were killed that night.  It was as though the desperate wails of their broken mothers could be heard even in Ramah; a village two hours north of blood-stained Bethlehem.

My heart aches for those mothers.  My heart mourns for the innocent lives lost that night.  But, sadly, this is evidence that our world has always been full of evil and is in desperate need of a Savior.

There are so many layers to the Christmas story.  It is much more than a baby in a manger. It is a promise fulfilled.

700 years earlier, the prophet Hosea foretold of the Messiah King coming out of Egypt (Hosea 11:1).  But, in order for this to happen, Joseph had to receive another wake-up call.

“Get up!” the angel said. “Take the child and his mother back to the land of Israel, because those who were trying to kill the child are dead” (Matthew 2:20).

Joseph is a perfect example of godly leadership and submission. I am certain he had doubts, but trusted the faithfulness of God.When he responded in obedience, he didn’t question the message or ask for time to think about it.  As a result, Jesus’ life was spared and prophecy was brought to completion.

Sometimes, we are asked to do difficult and uncomfortable things without knowing or understanding the “why” behind the request.

Sometimes, God calls us to action and we don’t have time to waste or overthink His petition.

We no longer have the luxury to assume the small acts of love and kindness that God lays upon our hearts are inconsequential. We may be one act of love away from saving someone’s life.

This world needs the news of Jesus Christ.

This world needs to see Jesus in, and through, YOU.

The people you can influence need your obedience.

Today is YOUR wake-up call:  GET UP! Don’t ignore the crucial message, we don’t have time to waste!

Have you ever hesitated when God called you?

DAY 27:You Came For Christmas