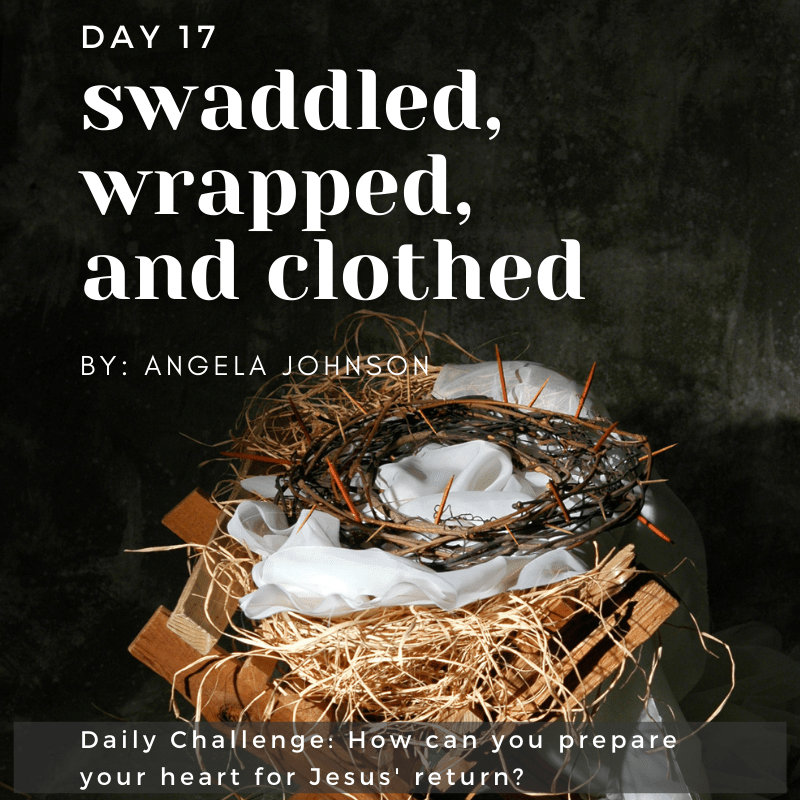 Why does the story of Jesus’ birth mention the specifics of how He was clothed — not once, but twice (Luke 2:7, Luke 2:12)? What significance could possibly be associated with such seemingly trivial information? Why was this particular detail forever captured in Scripture?

Many of us think modern mothers should be credited with the adorable art of baby burritos, but swaddling was an ancient practice even in Jesus’ time.  As a new mother, Mary would’ve followed the custom of her day and wrapped Jesus’s limbs in long strips of cloth to prevent Him from hurting himself by kicking, scratching, or rolling over.

Today, we understand that swaddling protects and soothes the frail newborn.  The security of the snugly folded cloth helps infants transition from the womb to the world.  But there is more to mentioning this practice than illustrating the commonness of Jesus’ birth.

Isaiah had prophesied: “Therefore the Lord Himself will give you a sign: Behold, the virgin will be with child and will give birth to a son, and will call Him Immanuel” (Isaiah 7:14).

You see, Jesus wasn’t the only swaddled newborn to be laid in a manger during this time.

Priestly shepherds were designated to raise lambs for sacrifice. After a lamb was born, it was wrapped in swaddling strips of cloth to protect it from thrashing about, harming itself. The shepherds would then place the lamb in a stone manger, until it had calmed down enough to be inspected — because a blemish or broken bone would disqualify it from becoming a sin-covering sacrifice. (Exodus 12:5)

When Jesus was born 745 years after Isaiah’s prophecy, the angels heralded the news to shepherds who would understand this significant sign.

“And this shall be a sign unto you; You shall find the babe wrapped in swaddling clothes, lying in a manger” (Luke 2:12).

The shepherds would know exactly where to find the baby Messiah.  He would be swaddled and in a manger just like their own precious lambs meant for sacrifice.

However, this would not be the only time Scripture would make note of how Jesus was wrapped.

After His earthly ministry had been fulfilled, this perfect and spotless Lamb was sacrificed to not only cover sin, but take it away — once and for all. When He breathed His final breath hanging from a cross, Joseph of Arimathea, “…asked for Jesus’ body. Then he took it down, wrapped it in linen cloth, and placed it in a tomb…” (Luke 23:52-53).

In John 20, we read about the resurrection story.  In verses 5 and 6, John and Peter notice the strips of linen that had bound Jesus’ dead body.  They were lying in the empty tomb.  Scripture again takes an entire verse to specifically mention the cloth that had covered Jesus’ face.  It was not just thrown off like the other grave clothes, it was purposely folded and lying to the side (John 20:7).

However, if the master got up from the table, folded his napkin, and laid it beside his plate, this signified, “I am coming back!”

The folding of Jesus’ face cloth was the sign that someday, He will return again!

The baby in a manger would not stay swaddled.

The sacrificed Savior would not stay dead.

Someday, we will see Him again, face to face — clothed in all His glory!

How can you prepare your heart for Jesus’ return?